Nothing Spanish about Historic Spanish Point

First off, let’s get one thing straight: Historic Spanish Point, in Osprey, did not derive its name from the Spaniards who settled there — because they never did.

In spite of having visited this beautiful site many times while chaperoning school field trips with my three sons, for some reason I had completely forgotten that fact. But I was reminded of it when I took a guided tour with the Spanish Point associate director, Kara Morgan.

“There is nothing Spanish here,” she said.

Apparently, in 1867, pioneers John and Eliza Webb were looking for a warm spot where they could move to escape the harsh New York winters. While in Key West, they met a “Spanish” (probably Cuban) trader who told them about an elevated, beautiful point of land that jutted out into the water in a safe harbor. The Webbs decided to sail up the coast and look for it.

After overshooting their mark and ending up in what is now Manatee County, they headed down south a little bit and found what they were looking for. They decided to settle there and farm their 160 acres of land that was promised to them as part of the Civil War reconstruction. But they were by no means the first to live on the land. More than 5,000 years ago, the original Floridians fished, hunted, lived and died there.

A Historic Spanish Point tour walks you through the now 30-acre site, beginning with archaic middens dating from 3000 B.C. You can even see what is inside one of them with an interesting attraction called Window to the Past, where there is a plexiglass wall dissecting a midden so all the layers of pottery, shells and bones can be seen. Think of a midden as a prehistoric landfill that enables one to learn about life thousands of years ago.

After the Webbs settled in with their family, they built several homes, which are also on the property and were used as guest homes by the woman who bought the land after the Webbs left — Bertha Honore Palmer.

The White home and the adjacent Sunken Garden and Pergola, overlooking Little Sarasota Bay, is a very popular spot for modern-day weddings. When I was taking my tour, Sarasota residents Summer Miller and Justin Bloom were finalizing plans for their upcoming wedding and reception for 150 people, which was going to be held in the garden.

“We were planning a destination wedding, but then we came here on St. Patrick’s Day, and knew this was the place,” Summer said. “In my mind, I think I always pictured getting married here.”

Justin actually owns SUP Sarasota, a company that runs kayak and stand up paddleboard eco-tours. He does one tour around Spanish Point, so visitors can also see the historic area from the water.

Though the property seems big (there is so much to see), the loop around the whole thing is only about 1 1⁄ 4 miles, and there are plenty of places to stop and rest along the way. And even though you won’t see any evidence of Spanish settlers there, I promise it is still one of the most interesting and lovely tours around.

Debbie Flessner writes the Live Like a Tourist column for the Sun newspapers. You may contact her at dj@flessner. net. 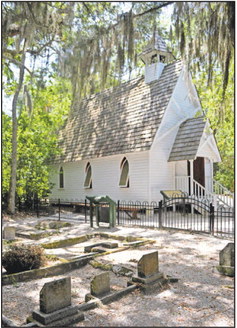 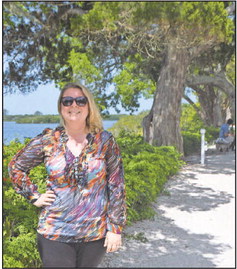 Kara Morgan, deputy director at Spanish Point, stands on the walkway in front of White Cottage, which was built in 1884. 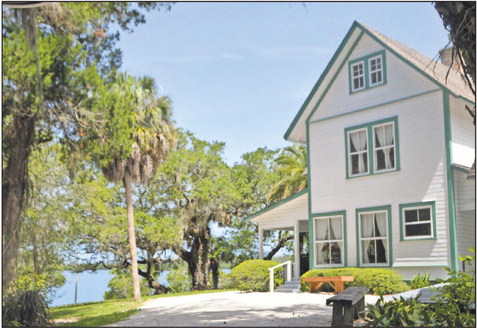 The Guptill home was built in 1901 and sits atop a prehistoric midden overlooking Little Sarasota Bay. At left: The charming Mary’s Chapel is still used for weddings.

Click here to see this page in the eEdition: